It’s been a pretty busy for me professionally which is why this month’s AV1 ecosystem update is coming in pretty late. It’s been one of the most exciting months for AV1 development and a lot to catch up on! With so much news this month, it is starting to feel like we’re at the cusp of something big! (which we hope AV1 will be )

Currently, YouTube is the biggest streaming platform delivering AV1 video and is responsible for the majority of AV1 video consumption on the internet. But a recent message posted to AV1 subreddit announced that YouTube was pausing the rollout of AV1. The reason was not shared but AV1 seems to be performing well at YouTube with the intent to expand its use soon. Here’s the full message:

At Computex 2019, Realtek demonstrated RTD2983 SoC can support decoding 8K resolution videos encoded using the AV1, HEVC, and VP9 codecs. The chip can process all HDR formats, reduce noise, upscale, and perform all the other functions common for processors for televisions and digital media players.

There were two conferences in June, AllThingsRTC 2019 and then Big Apple Video, where a lot of new information about AV1 was shared. We heard updates on the following topics which are all covered later in this update:

Past, Present & Future of AV1#

Debargha Mukherjee (Principal Software Engineer @ Google working on libaom) opened the AllThingsRTC keynote titled “Past, Present and Future of AV1”. This presentation can be seen below

I first heard about the Aurora AV1 encoder last month and commented on the ambitious claims made. This month, we got more information about Aurora and it’s exciting! Zoe Liu, co-founder & President of Visionular presented about their Aurora AV1 encoder and how machine learning has been applied to enhance the encoder. Zoe had a busy June presenting first at AllThingsRTC and then at Big Apple Video. Both can be seen below as well as some of the slides comparing Aurora to libaom AV1 encoder as well as x265. 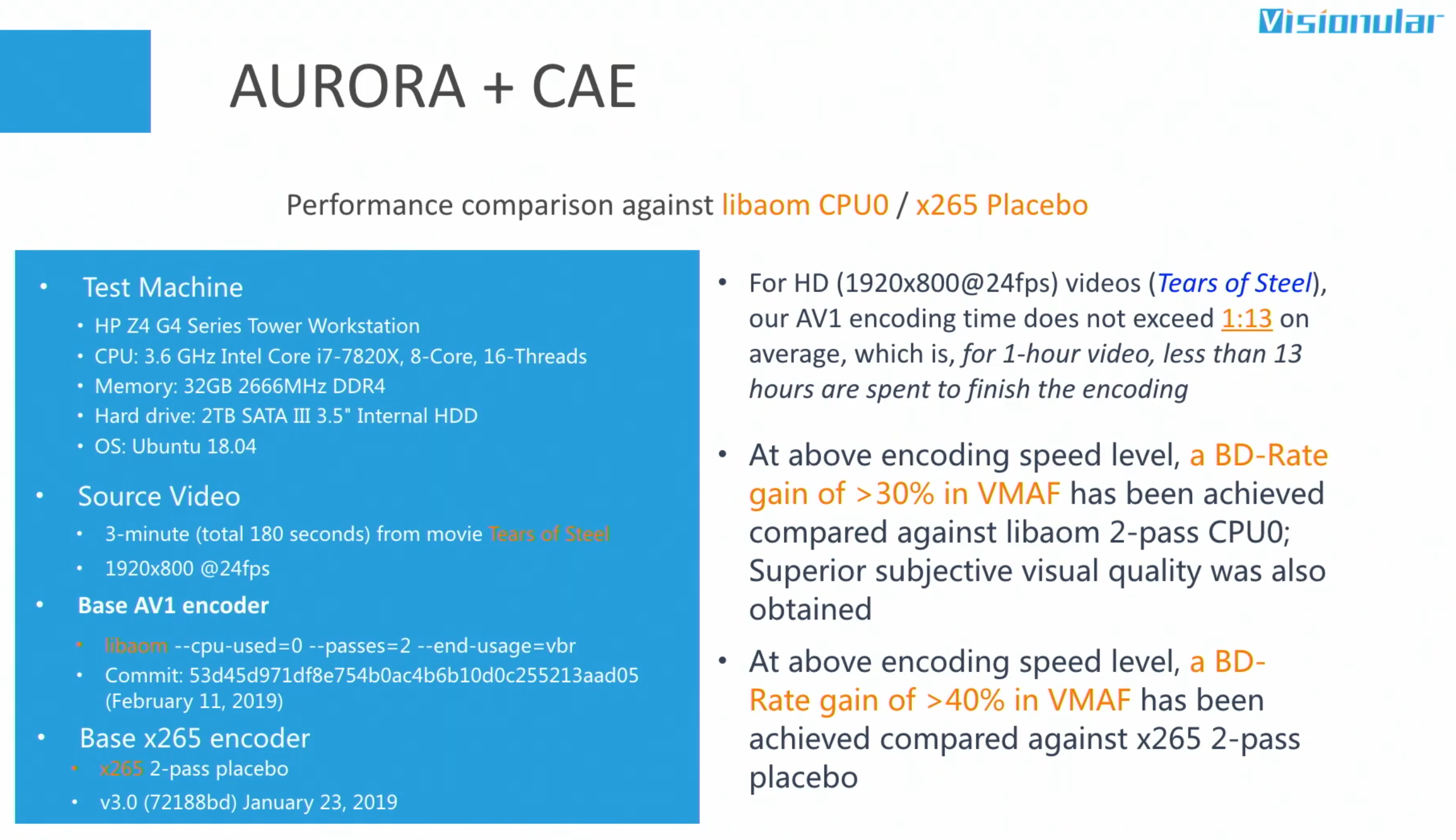 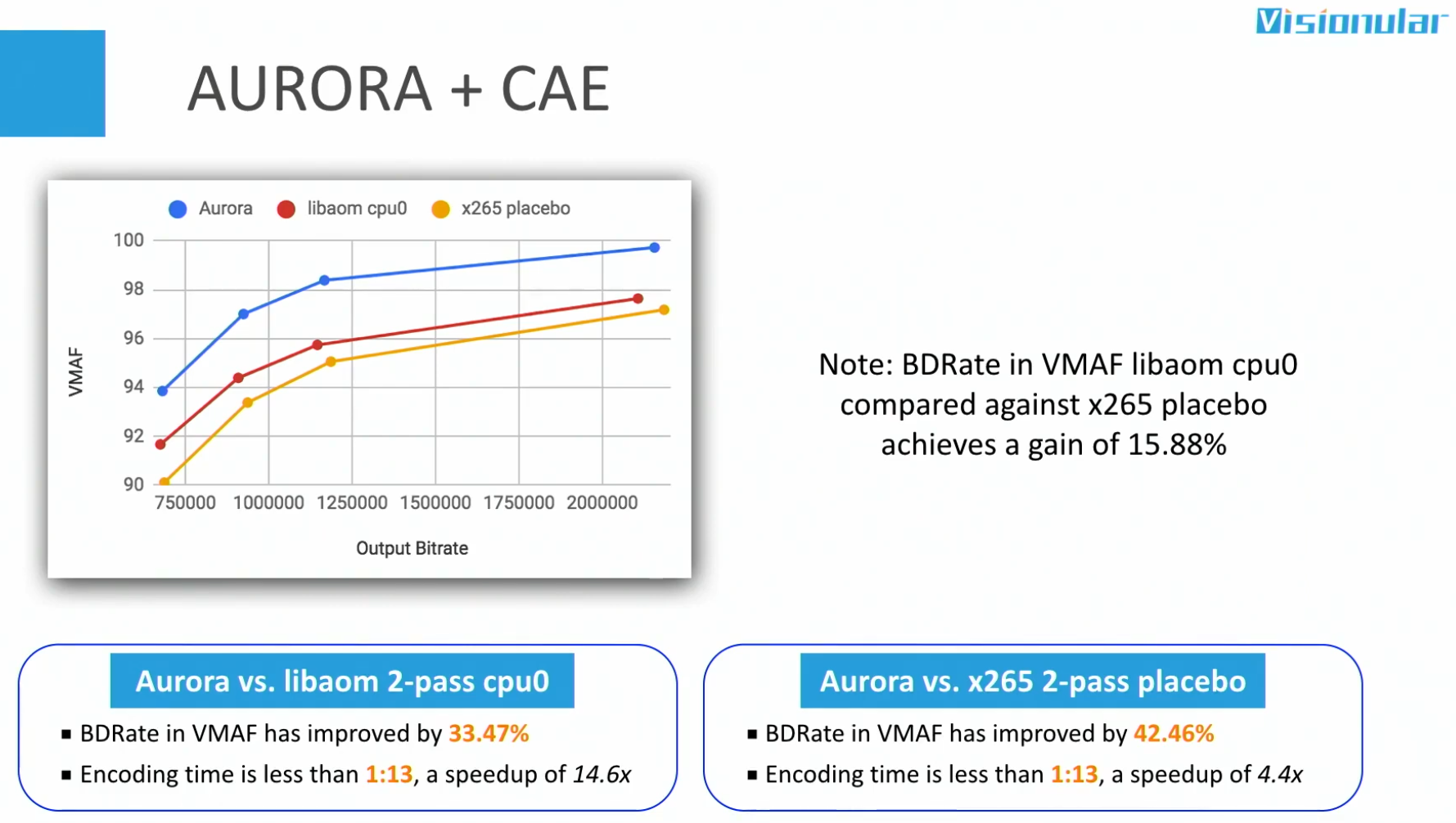 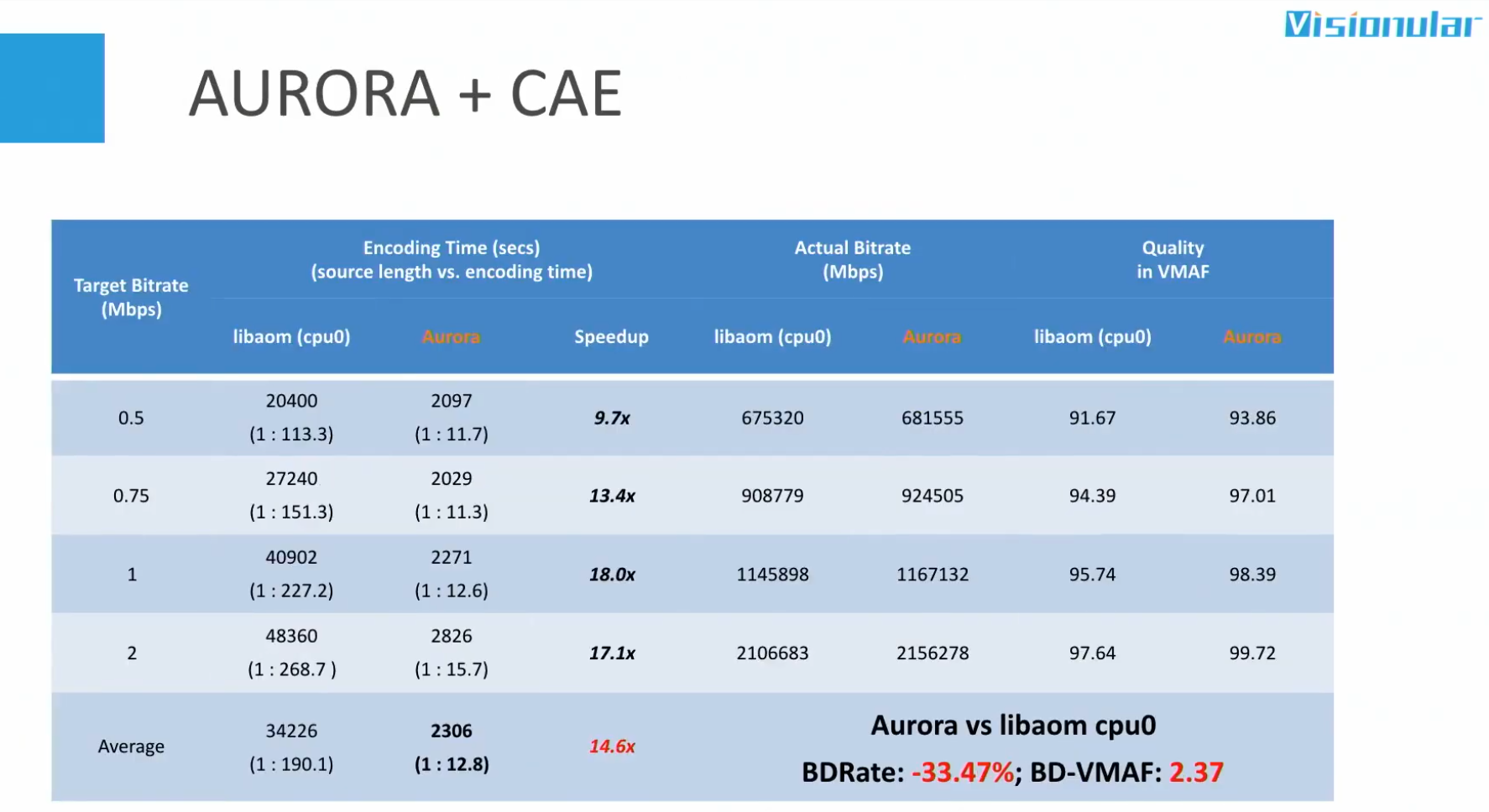 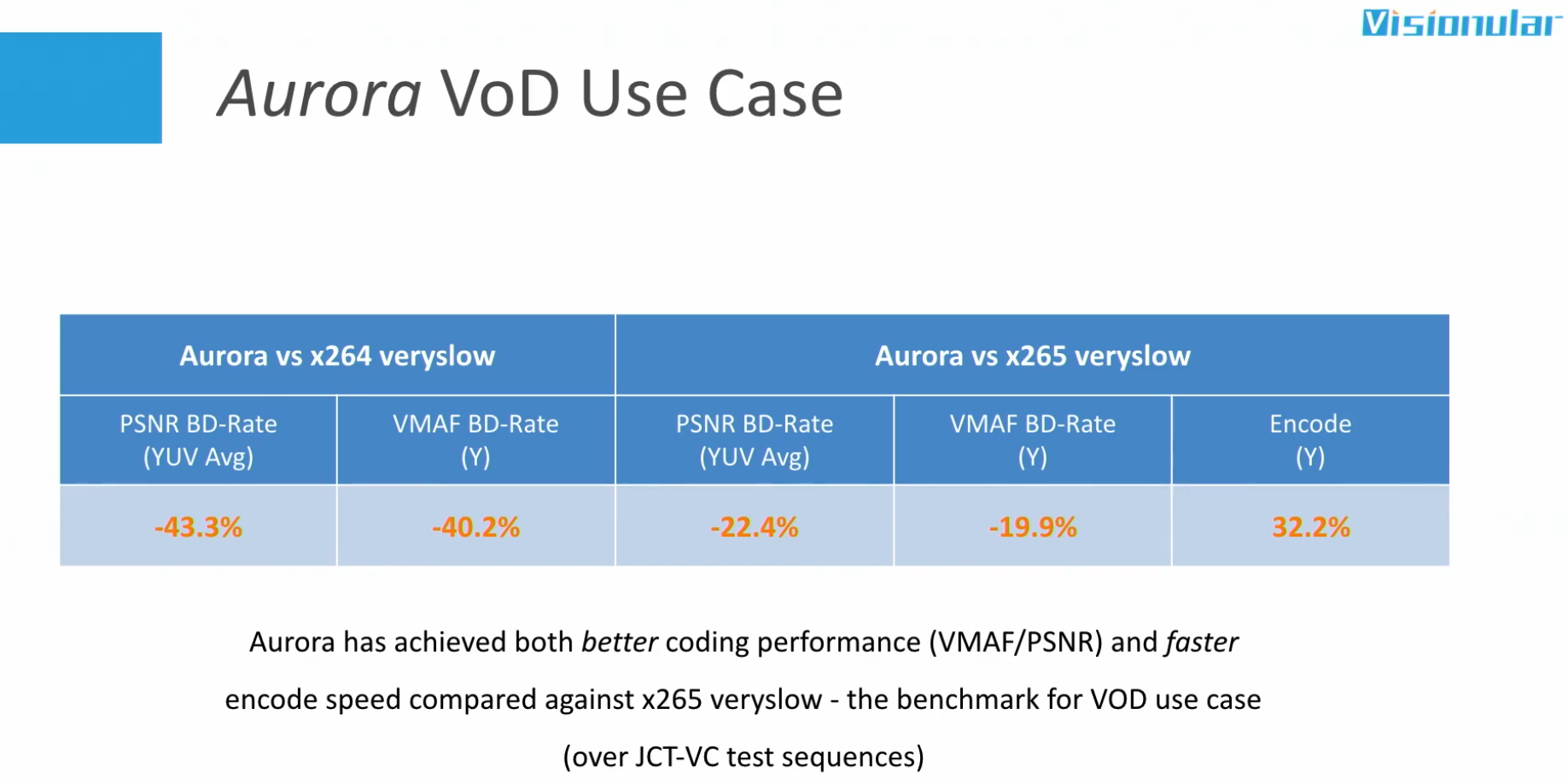 June continued to be a very active month for SVT AV1. I reported in May that 40 PRs were merged. Well June just beat that record! There were 51 PRs merged in June with the week of June 16th merging 216 commits which is the highest in the history of the project in one week!

Also in June, version 0.6.0 was released with the following updates

Hassene Tmar, product lead for SVT-AV1 at Intel, was present at Big Apple Video to talk about the goals, improvements and the roadmap for SVT-AV1. Here are some of the slides from Hassene’s presentation as well as video of the presentation. 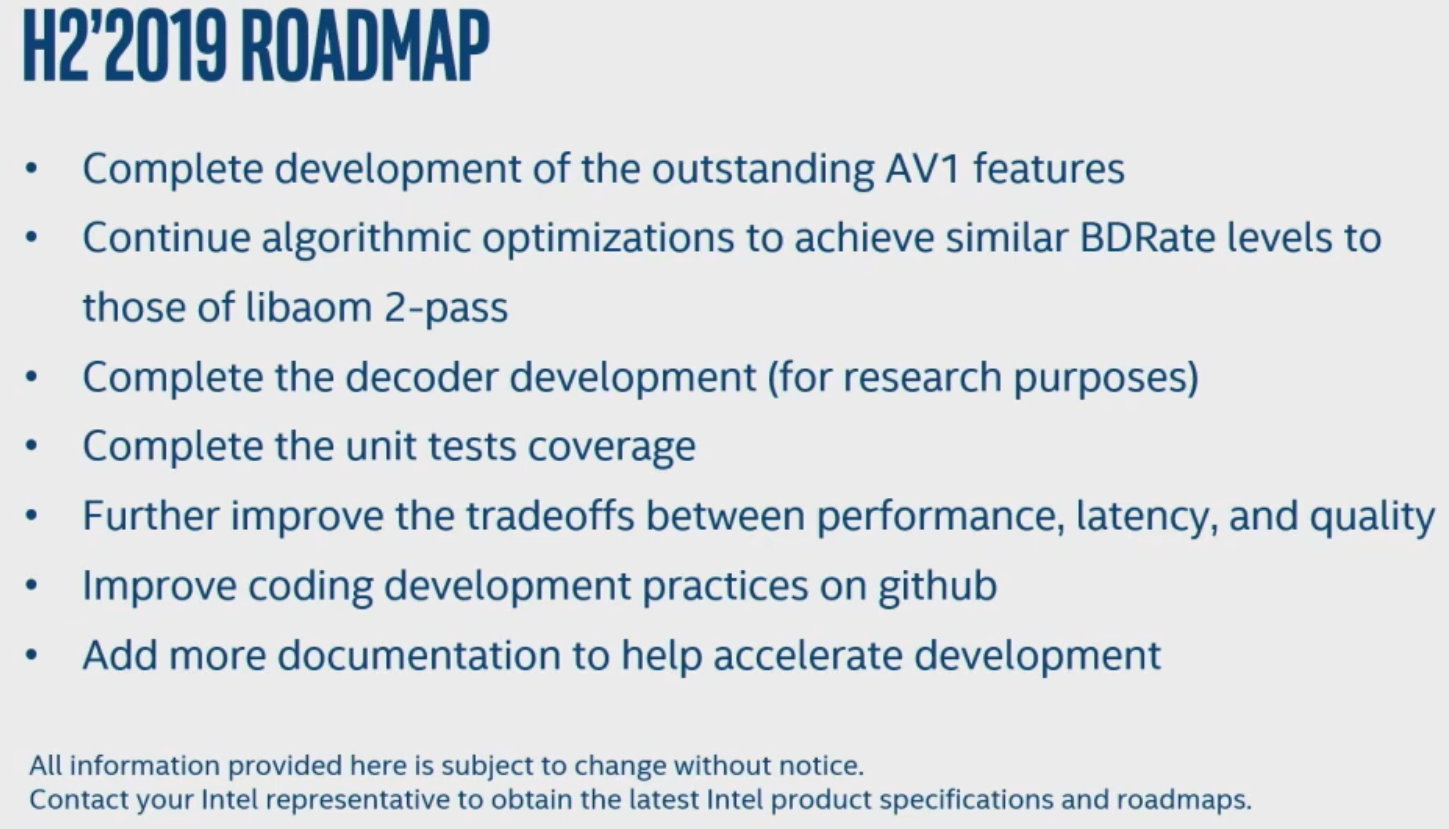 June was a pretty popular month for rav1e with 51 PRs merged!.

But the biggest news for rav1e was the partnership with Vimeo. Vimeo announced that they were adopting AV1 for their “Staff Picks” video category immediately. David Jervidal’s Staff Picked film “Capture the North” (below) is one example of the Vimeo videos leveraging AV1.

You can read more about the announcement here and behind the scenes engineering blog here.

NGCodec shows off AV1 encoding with their FPGA encoders#

Oliver Gunasekara, founder of NGCodec, discussed their approach to use programmable hardware accelerateres (Xilinx FPGA’s) to replace Intel Xeon CPU’s at Big Apple Video 2019. Having successfully worked with Twitch for VP9 acceleration, Oliver showed off the next step in that journey - FPGA accelerated AV1 encoder. See more below:

Twitch was also one of the speakers at Big Apple Video presenting their plan for AV1 adoption as well as their worries about the AV1 ecosystem. One of the most interesting things talked about in this presentation was the inclusion of Twitch proposed “Switch Frame” in AV1 specification that allows shorter segments in ABR, enabling low latency live streaming without the burden of using bit-consuming IDR frames. A segment can start with a “Switch Frame” and the video player can switch resolution at any segment boundary. 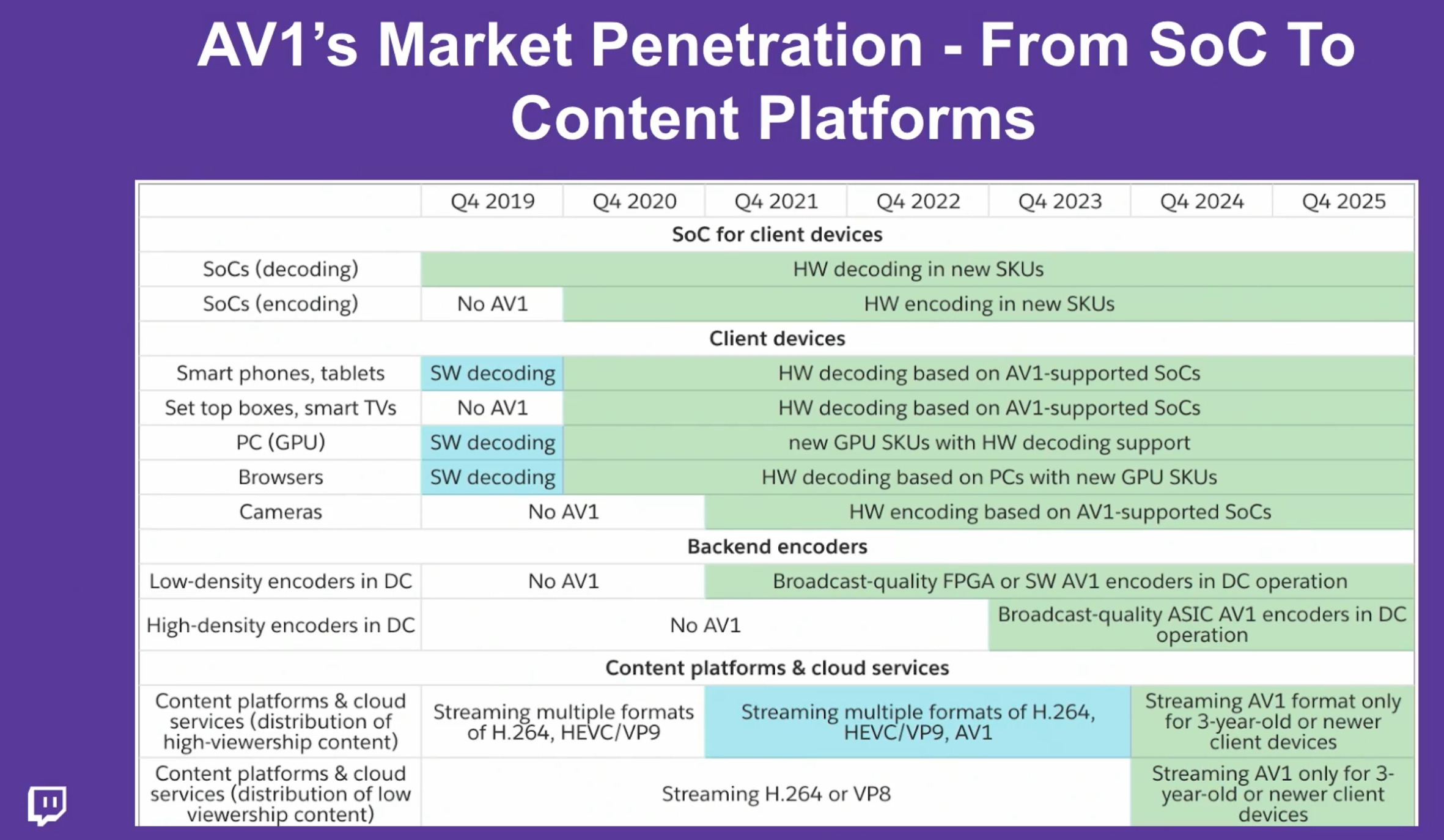 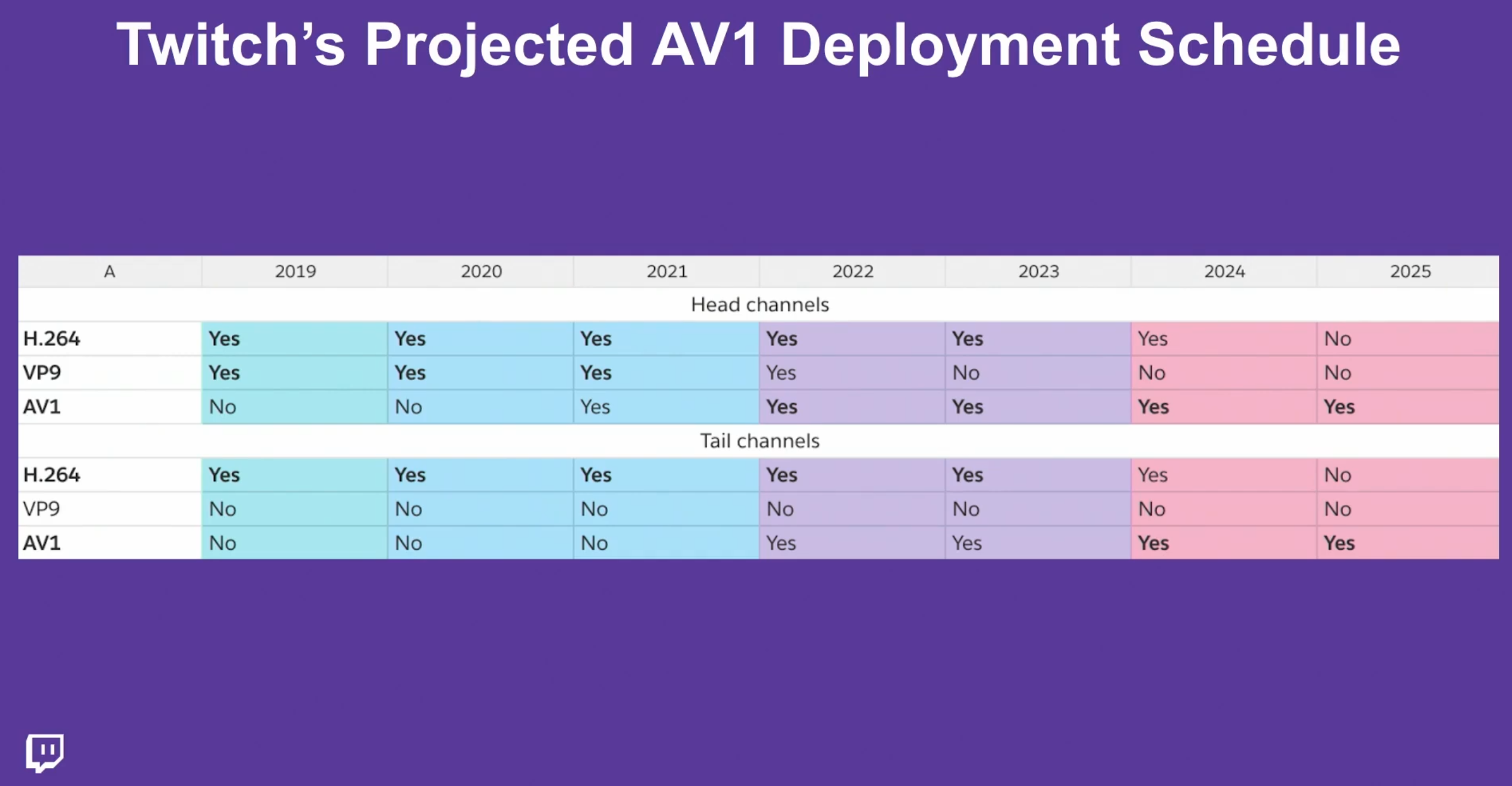 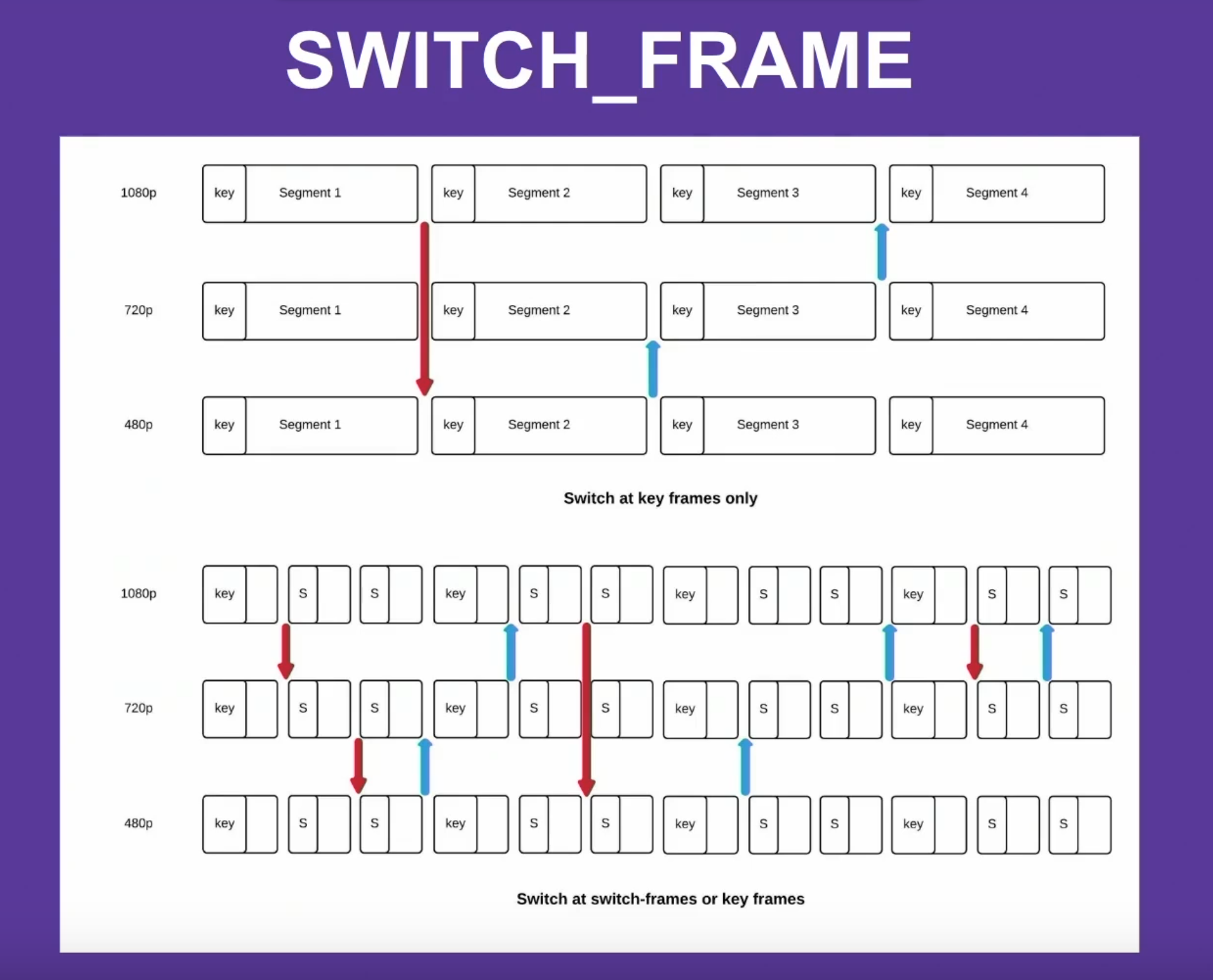 Ronald Bultje, who designed VP9 at Google previously, introduced the world to Efficient Video Encoder (EVE) for AV1 at Big Apple Video. EVE is a commercial encoder that promises to provide the best visual quality amongst the AV1 encoders. Here are some interesting slides from Ronald’s presentation especially the quality comparison versus libaom AV1. The whole presentation can also be viewed below. 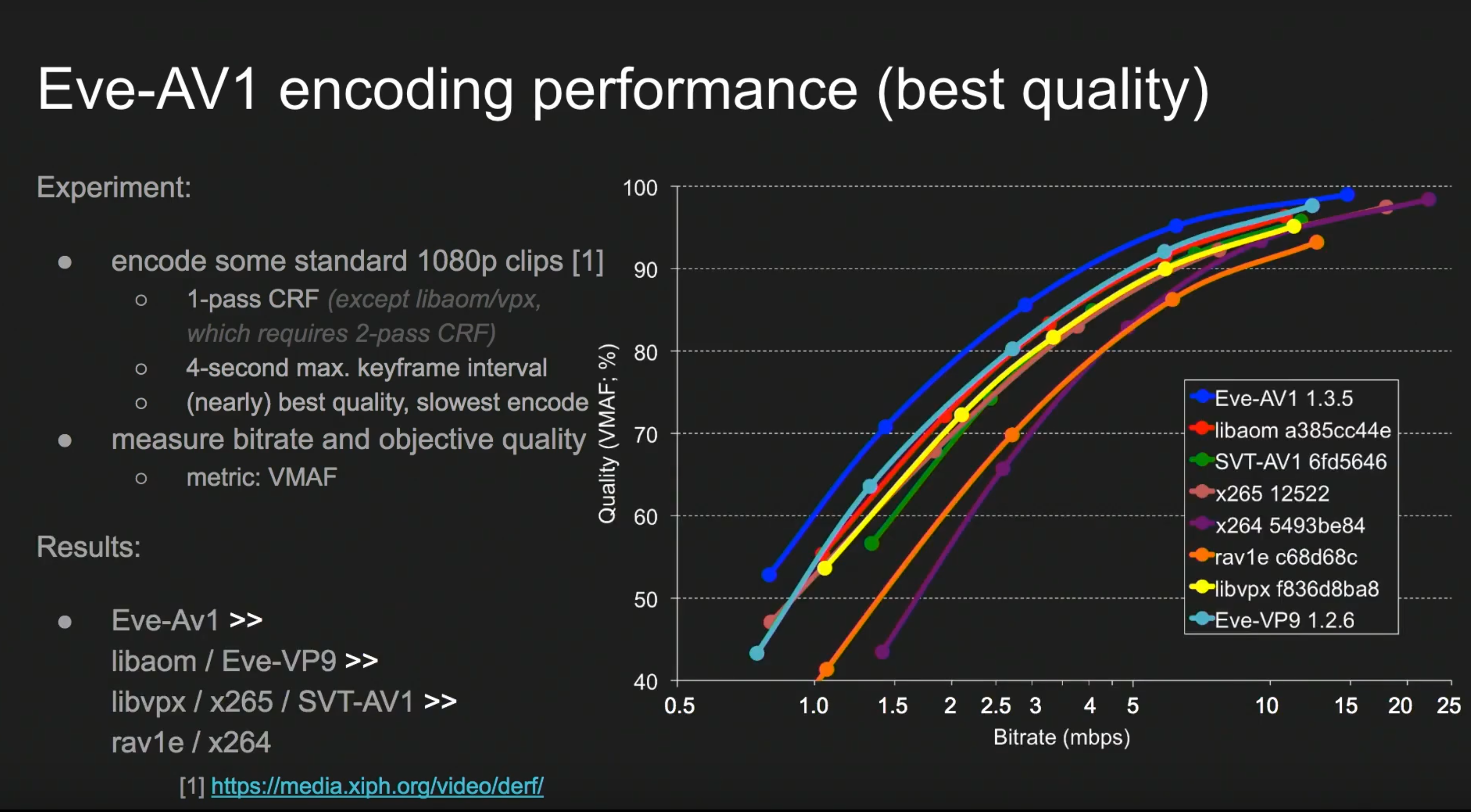 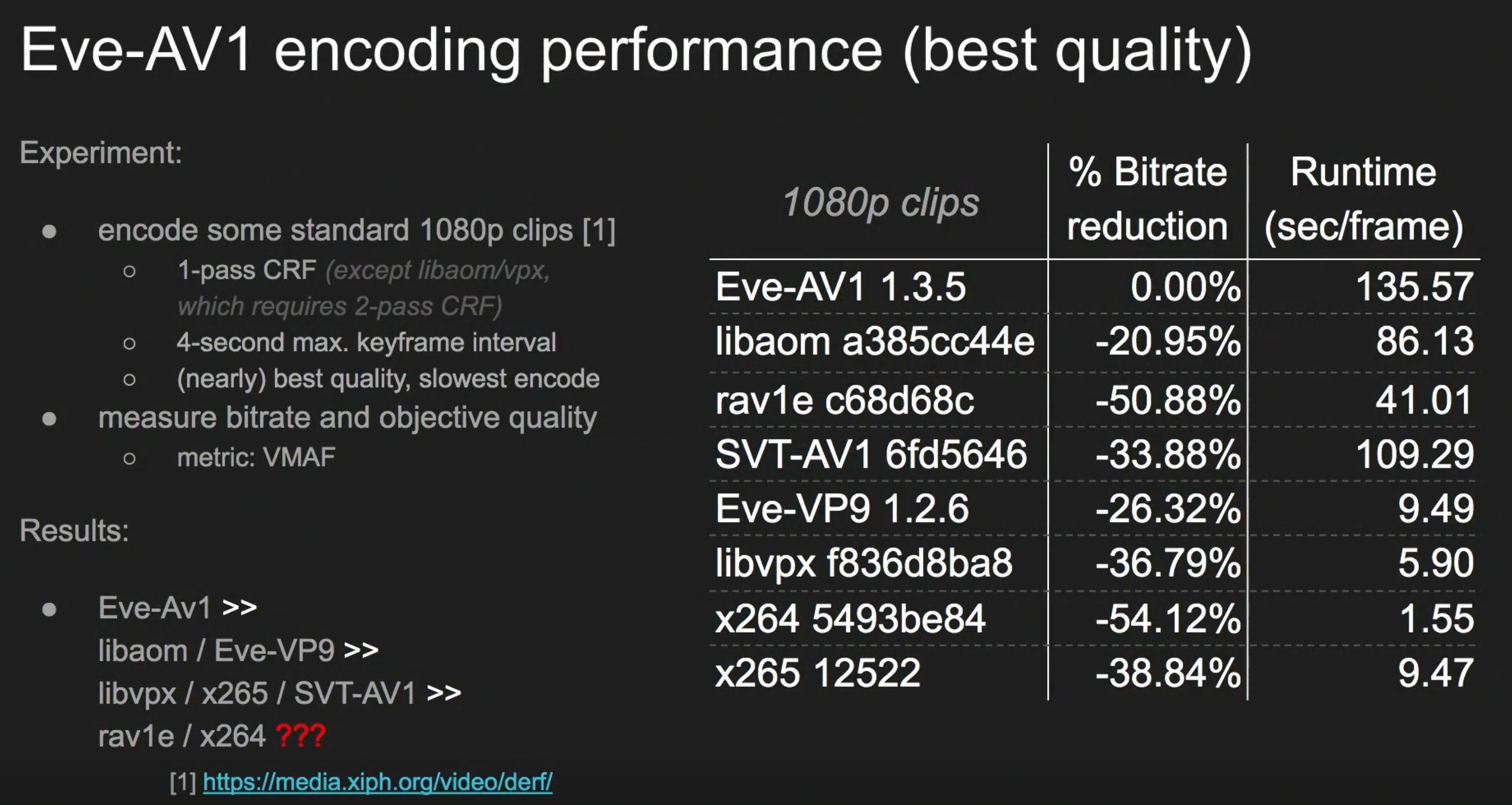 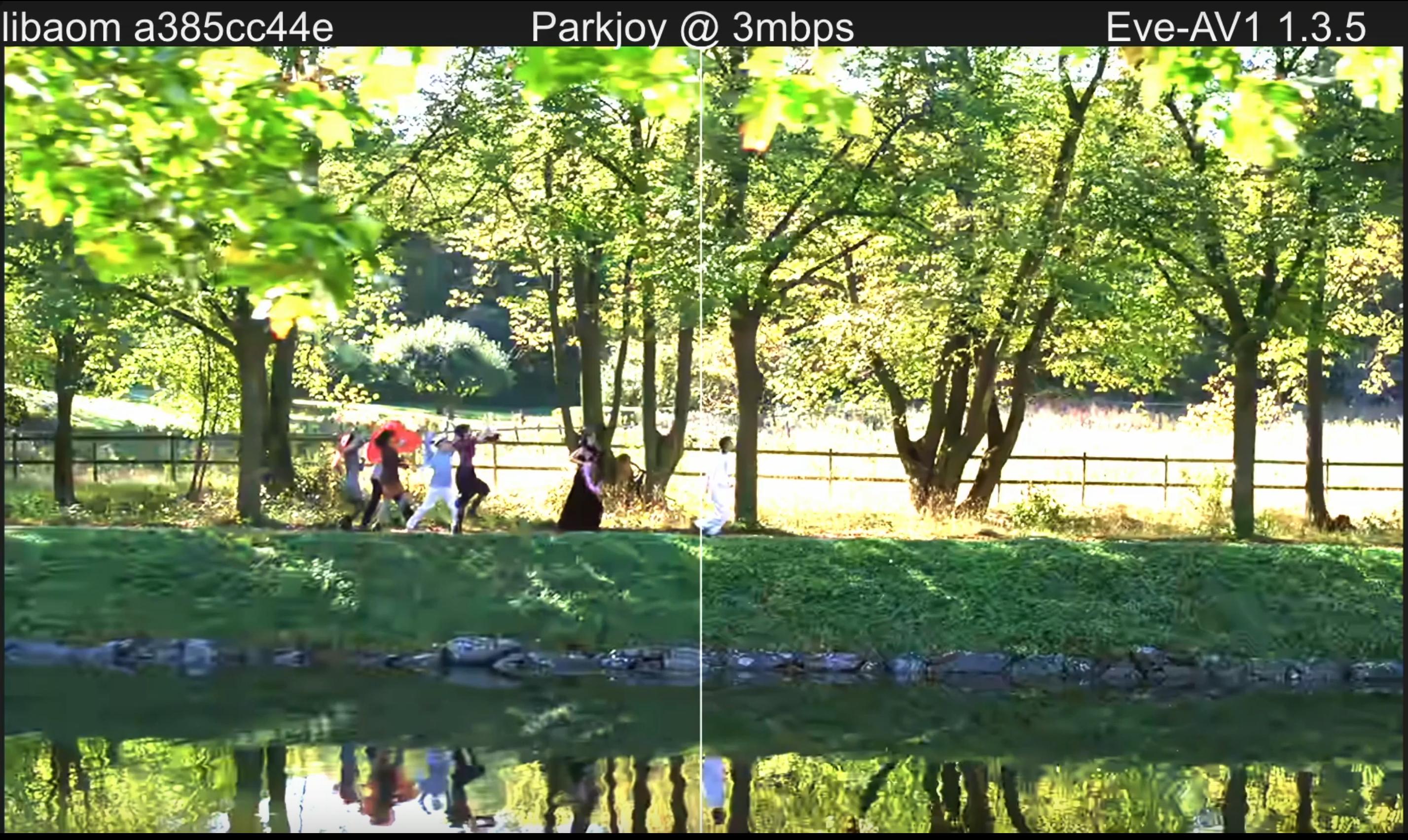 At Big Apple Video, Cisco showed a closed-source implementation of their AV1 encoder that real-time, high quality AV1 encoder optimized for video collaboration. The demo inlcuded real-time AV1 encoding and transmission in a Webex video meeting, with HD video at 720p30 and high- framerate desktop share at 1080p30. The demo encoding which was done on a commodity laptop was at half the bandwidth of H.264 for 720p30 and 2/3 bitrate of H.264 of for 1080p30. The implementation included a full cloud media stack which was used to encode to AV1 video rather than the commodity laptop, with AV1-enabled switching servers deployed on the internet, with complete end-to-end call signaling and resilient media transmission.

Watch the live demo at the Big Apple Video presentation below:

Cisco wasn’t the only demonstrating a real-time AV1 video encoder in June! At CommCon UK, Millicast announced availability of one-to-many, real-time low-latency video stream capability using AV1 in WebRTC. In a contrast to Cisco who declined to open-source their real time implementation, Millicast is committing to making the binaries publicly available for everyone to benchmark and test. There are also discussions around open-sourcing this implementation.

Read more about the announcement below as well as the slides from the presentation.